TRM Microwave, a high-tech Woman Owned Small Business located in Bedford, NH, has much to be enthusiastic about despite recent adversity. The company specializes in designing and manufacturing custom RF components and integrated subassemblies that are found on most fighter jets, satellites, naval ships and are used in programs for the Military, Aerospace and Commercial markets. These innovative units play a critical role in radar, wireless communication, and threat signal detection.

In May 2016, just one month shy of TRM’s 46th anniversary, company Founder and Chief Technology Officer Tony Tirollo passed away. Transitioning through a deep loss, his wife and CEO/Owner Wendy Tirollo along with the entire company, have dedicated themselves to TRM’s success. “Tony was committed to growing this company to its fullest potential. I know he’d be proud of the hard work everyone has put in and all the achievements we’ve accomplished in just the past year. Now we’re soaring up to new heights in 2017 and it’s very exciting,” Tirollo stated.
TRM recently obtained AS9100 certification and after a 3-year vetting process, won participation in the U.S. Department of Defense Mentor Protégé Program over 20 other companies. Raytheon, a Tier 1 prime defense contractor, is their mentor. “Our engineers work side by side with them on programs, help solve design challenges, and build innovative custom solutions for their systems. In turn, they provide outstanding guidance to our business infrastructure and technology roadmap. We’ve seen amazing results already. The company is rapidly growing and expanding capabilities. Historically, our catalog parts were always hand built. Now we’ve implemented robotic automation into our surface mount line, material cutting and testing phases – giving us superior precision,” says COO Mark Schappler. Their pick and place assembly machines solder electronic components to printed circuit boards, materials are now laser cut and epoxy sealing is programmable. “Automation enhances the effectiveness and repeatability of our assembly and sealing processes, making parts more robust.”

In October, TRM started utilizing a new 3D printer which nearly doubles their tool production output and can be used for numerous applications like Resistor tools, Coax tools, Vibration fixtures, Oven fixtures, Prototype housings with nickel plating and Laser alignment fixtures. The company’s newest addition is an environmental testing machine that uses a camera to look for weaknesses in areas like solder joints. Mark says that not only do these capabilities increase accuracy and reduce production time and cost, but one of the best benefits is “these new machines haven’t replaced anyone’s job. In fact, we’ve hired skilled, new talent to program, operate and perform maintenance on them.”  The company has added plenty of room, going from 11,000 to over 20,000 square feet of manufacturing space.

Schappler believes pushing technological limits is what propels them to successfully offer custom built parts with unmatched design development and engineering expertise. “A current industry trend is to increase the bandwidth of performance. Historically, the bandwidth of many of our components was linked to individual octave bands like L-Band, S or X-Band. Many of our customers are now requiring components that cover many of these bands.” In addition, TRM is seeing more requests to combine individual components to build smaller multi-function modules or integrated subsystems. Mark emphasizes that their focus is on listening to customers. “Our engineers thrive on collaborating with clients to solve their design challenges, complete their ideas and build the highest quality solutions while remaining cost effective. We’re driven to listen. That’s how we cultivate long-lasting partnerships, align our technology road map and develop capabilities that best serve the future needs of the marketplace.” 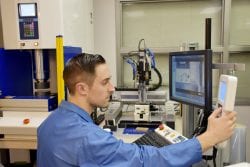 Process/Quality Engineer Jim Popovitch Jr. operates TRM Microwave’s new Cartesian robot and Servo press. The robot measures the cavity depths of an RF assembly and sends over commands automatically to the Servo press to custom fit a dielectric into the housings. It will then pick and place covers and automatically place screws to finish the assembly.