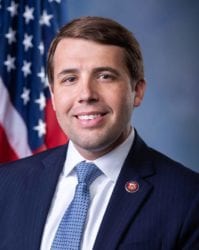 In partnership with the NH Tech Alliance, Join us for an update from D.C. and a chance to have Congressman Pappas address any question or concerns your business may have. This will be Tuesday, June 9th at 3:30 p.m.

In Congress, he serves on both the Veterans Affairs and Transportation and Infrastructure Committees. Congressman Pappas has focused on key health care issues that matter most to Granite Staters, including improving access to health care, lowering the high cost of prescription drugs, combating the addiction epidemic, and ensuring veterans get the benefits they have earned.

In recent weeks and months, Chris has worked with leaders across New Hampshire to protect the Granite State’s Main Street economy and health and well-being during this challenging time. He has called on Congress to subsidize the cost of COBRA coverage for those who have lost their jobs, introduced legislation the Too Small To Fail Act to provide billions in zero-interest loans and direct grant to small businesses and provide  testing and treatment available free of cost for children and anyone on Medicaid. In the last two months, Congressman Pappas met with over 200 small business owners to hear their concerns and understand how to advocate for them. Based on those conversation’s, he has called on Congress and the Treasury Department to listen to the concerns of small businesses and fix the PPP program so that it works better for New Hampshire businesses, including better loan terms, and increased flexibility to allow businesses to take advocate of the program when they need it most.