Editors Note: We would like to thank New Hampshire Business Review for highlighting NHADEC at the Farnborough International Airshow in England and publishing this great piece on our consortium’s continued growth. This article was written by Liisa Rajala and published on September 14, 2008. 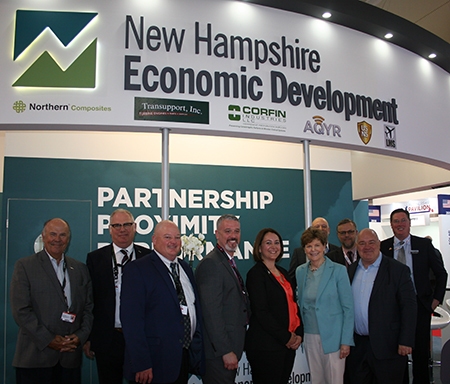 One dinner in July set in motion the potential future sale of nine helicopter engines to Pakistan by Merrimack-based Transupport.

The dinner was one of three notable meetings that produced inroads to international markets for the gas turbine and engine aircrafts supplier. Transupport also established a contact in charge of U.K. defense procurement — business the company hopes to regain after missing out on millions of dollars in contracts when the U.K. Defense Procurement Office moved its operations back from the U.S.

“So there you go, I got my U.K. connection,” said Ken Foote, vice president of Transupport, reflecting on his trip, which was greatly subsidized by a federal State Trade Export Promotion, or STEP, grant, enabling him to attend the Farnborough International Airshow in England.

“For me, these shows, you talk about return on investment — sometimes it’s immediate, sometimes it’s the people you meet afterward that give you the connections that are the real big business,” he said.

STEP funding allowed six companies to take part in a booth organized by the NH Office of International Commerce and U.S. Department of Commerce, which also helped promote the NH Aerospace and Defense Export Consortium (NHADEC), an industry-led economic development vehicle that was founded by a STEP grant.

Having signed a memorandum of understanding when NHADEC board member and Corfin Industries CEO Don Tyler attended the last show in 2016, this year, Tyler and other NHADEC members attended a luncheon with the executive leadership of the Farnborough Aerospace Consortium.

To continue reading this article click here or the link below!